What Happens in 2050 if We Don't Address Climate Change? 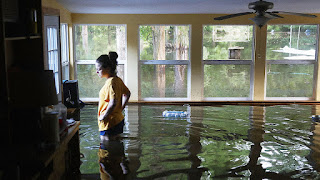 If we do not address climate change now, the 8.5 billion people that will be living in the next generation will face an entirely different climate by 2050. On average, the earth will slip into the most extreme conditions that have not happened in over 150 years. This will happen if we continue with the ‘business-as-usual’ approach to addressing the climate change. Here are a few examples of what can happen.
Wiping out of major flora and fauna species in tropical areas
The first place to feel these changes will be the tropical areas. In these areas, there is a rich diversity of species and large swatches of rainforest ecosystems. Unfortunately, these ecosystems have little capacity to adapt to new climate change problems. Moreover, in the tropics lies some of the poorest countries that have no capacity to deal with the problems which can result in extreme heat episodes causing hunger, devastation and death.
The oceans will become more acidic
It is believed that the ocean has absorbed over half of the human-made carbon dioxide since the days of the industrial revolution began over two hundred years ago. By 2050, the oceans will be more acidic than they have ever been. In fact, the oceans surpassed their acidity levels in 2008.
The effect of acidity will be a disruption of species that use the carbon to build their skeletons and shells such as the corals and mollusks. Without many of these organisms in the oceans, the entire ocean's ecosystem will be changed and this will affect people who make their living from such activities as fishing.

The earth will simply be hot
One of the most devastating effects of the greenhouse gasses is the warming of the earth. This warming has been gradually increasing since the industrial revolution. Recently we have seen the hottest years that have been experienced since the civilization of humanity. If no changes are made, the earth will be unbearable and perhaps not inhabitable by the year 2050. This must be addressed for the next generation.
Many of the areas near the ocean will experience the rise in sea levels and flooding will become the order of the day. Areas around the tropics that depend on the rainfall will experience severe drought while other areas will experience very high rainfall that will be devastating.
It is time that the world stop debating whether it is real or not. Science proves that it is. We must take charge and combat climate change before spins out of control and defeats us. If we don't we can expect to face even more compounded problems by the time we reach the year 2050. This is well within the lifetime of most inhabitants of the earth.